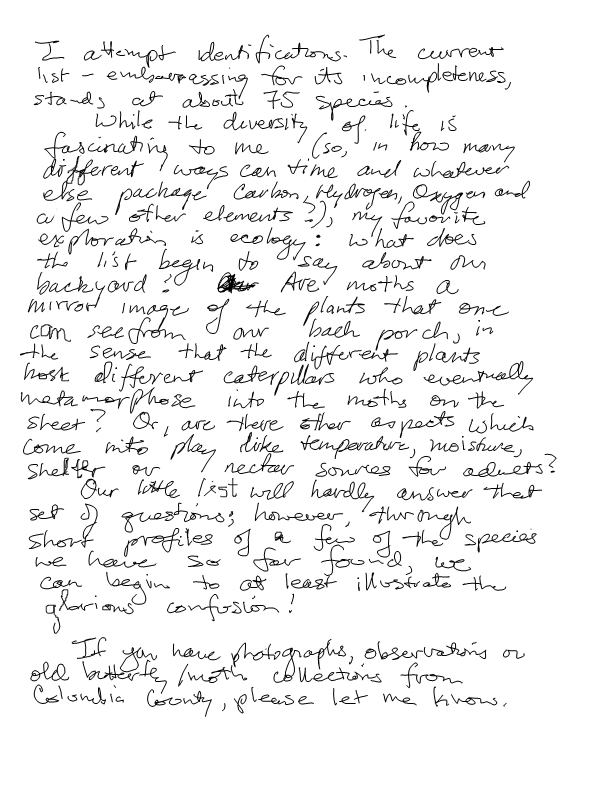 It may look as if we're trying to dry our laundry with a sun lamp, but actually this is our set-up for moth surveying. Of course, we do it at night, but then it's harder to visualize the arrangement. 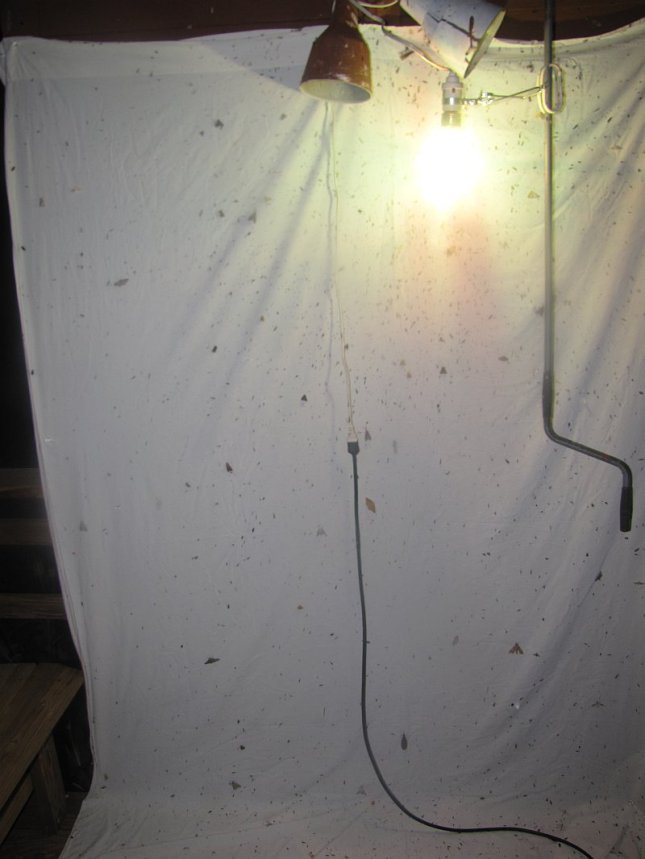 With the light on (and located in a slightly different spot), the setup looks like this in action.

The view from the sheet suggests why this might be a relatively good spot to survey for moths: to the West, we have forest and stream corridor...

to the East, we have pasture, hedgerow and, not quite in view here, vegetable gardens. For this blog, I took the list of moths which had so far arrived at our sheet, noted down their reported foods, and then headed out into the surroundings to look for nearby exemplars of those food plants.

What struck me when first tallying the foods of the moths on our list was how many have caterpillars which are "polyphagous", a complicated word meaning that they aren't too picky in their diets (literally, "many eating"). More than 50% of the species on our list fell into that category. Dietary generalists include some of our most conspicuous moths such as the Polyphemus Moth, which feeds on a variety of woody plants.

Or the Cecropia Moth, whose larvae eat a range of woody and herbaceous plants (this pair was mating down behind the School; thanks to the Farm & Arts Program for letting us know and to our son Otter for taking the picture).

Or the owl-eyed Io Moth, whose caterpillars also dine on an assortment of woody and non-woody plants. Our showy Luna Moth - of whom I have no good pictures, but who has been relatively common this year - also sups on many different trees and shrubs. One aspect that is unclear is at what population level polyphagy occurs - could a given, individual caterpillar choose to feed upon whatever plant was handiest, perhaps even switching foods during its life cycle? Or, are the diets of given caterpillars or even of given populations confined to a more limited set of plants? 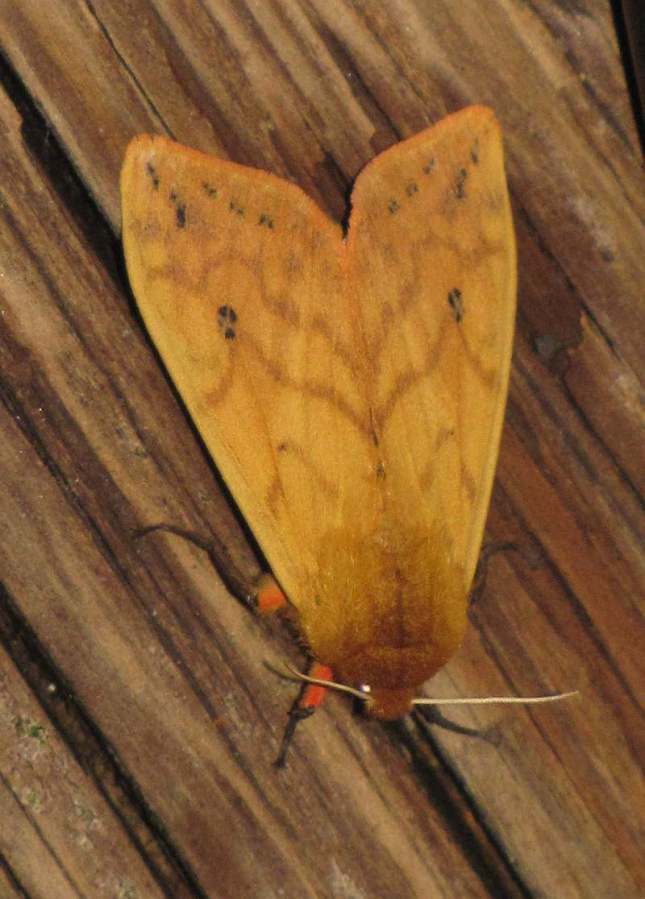 Given the abundance of its caterpillars, it is perhaps not surprising to learn that this dashing Isabella Moth, in scarlet leggings and black boots, is a generalist feeder on both woody and herbaceous plants. This moth is probably more familiar to us all in its caterpillar stage, when it is known as the Wooly Bear.

Then come species which are a bit more particular and reportedly feed upon plant groups. This is the Pink-shaded Fern Moth; it feeds upon ferns.

This happens to be Sensitive Fern. Do I know that the Pink-shaded Fern Moth feeds upon Sensitive Fern? No. Do I know it doesn't? No. One quickly reaches the apparent bounds of knowledge when exploring moths. 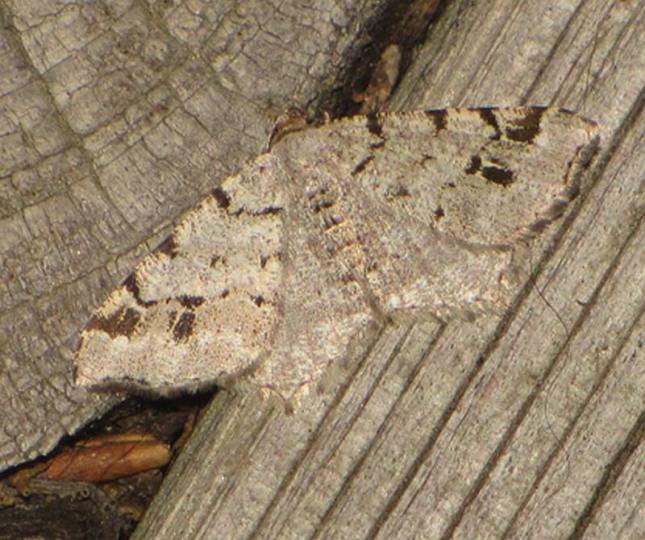 The caterpillars of the Pale-marked Angle feed upon another group of plants, the conifers, 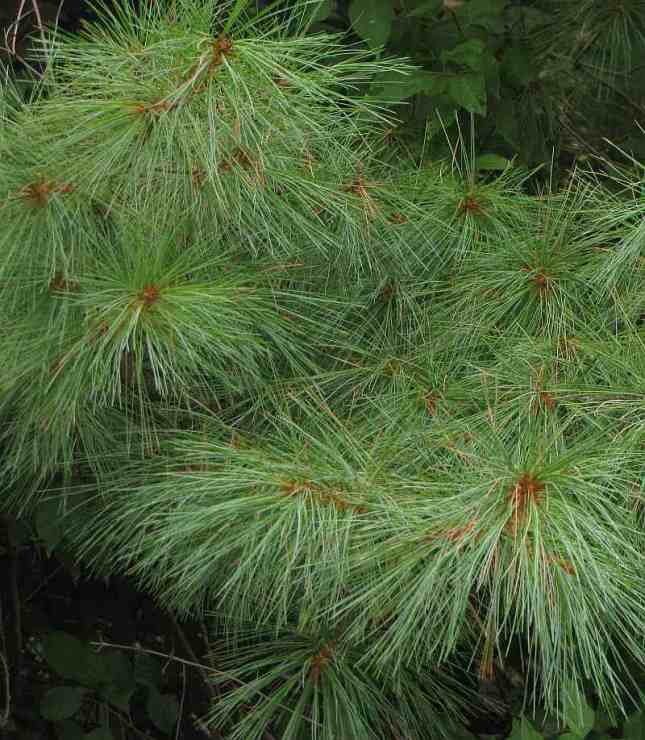 like this White Pine. There is some suggestion, however, that Hemlock may be a favored food. 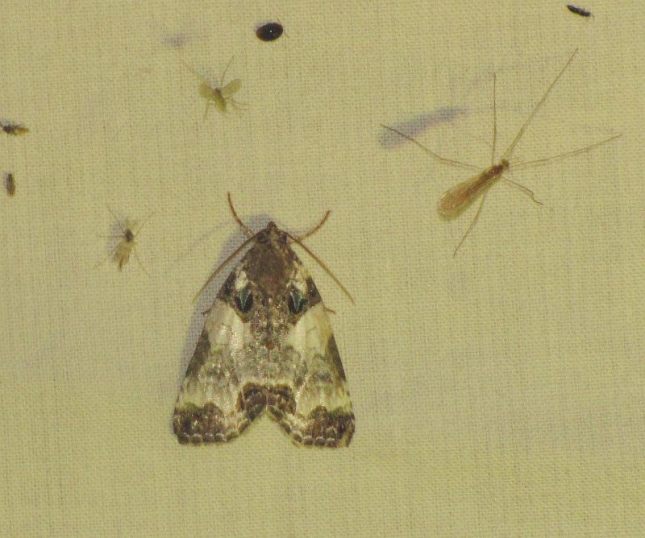 Then there are a set of moths which seem to confine their caterpillar diets to single plant families. This Tufted Bird Dropping Moth feeds primarily on plants in the Rose family such as Cherries, Serviceberry and true Roses.

This pair of Virginia Creeper Sphinxes (the one on the right is rather faded) were together on a rather busy sheet - Ground Beetles and a Click Beetle are clearly visible in this photo. This Sphinx feeds upon ... 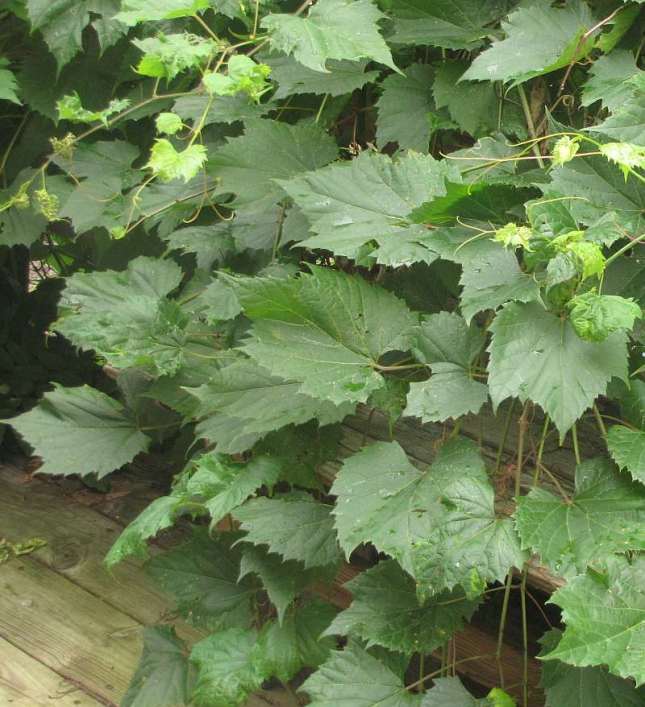 members of the Grape Family (Vitaceae), including its namesake and grapes like these, located just opposite our night light. 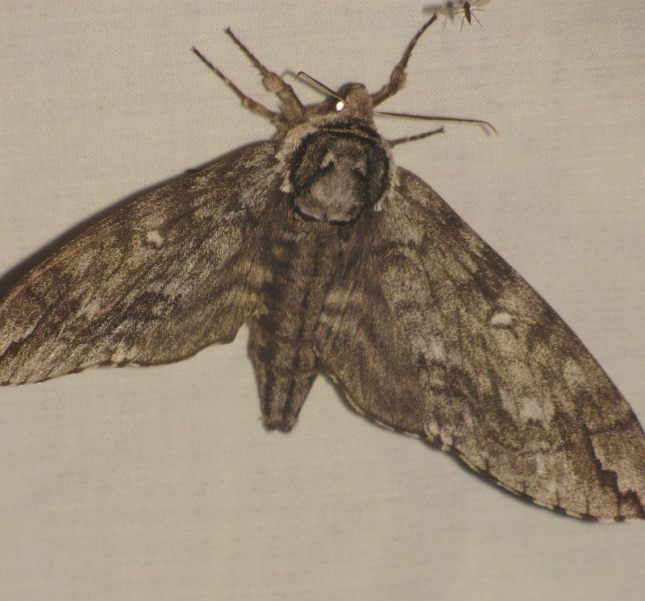 Similarly, the Waved Sphinx feeds only upon plants in the Olive family. There aren't olives growing on the back forty, but we do have plenty of...

ashes, another member of the Olive family. Ashes are particulary common along the creek below the house. 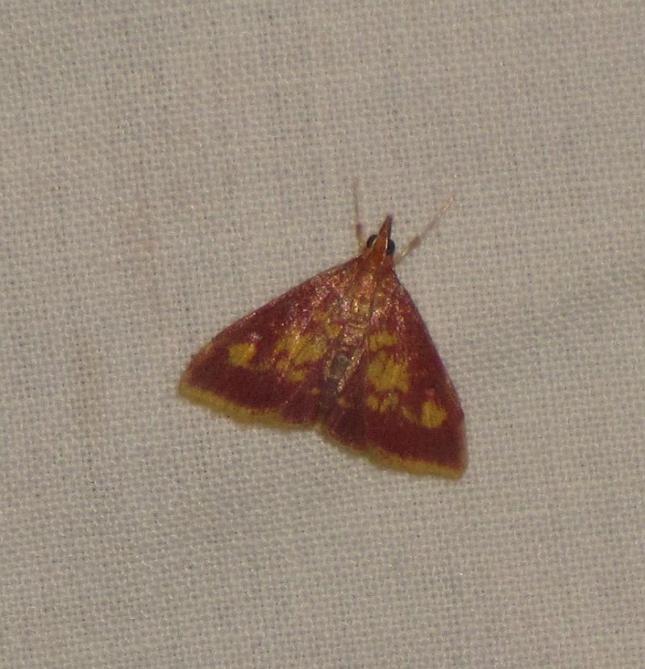 The beautiful if subtle Mint-loving Pyrausta feeds upon the not-so-subtle mints, such as...

this mint from a nearby roadside ditch. Like other members of the aromatic Mint family, this mint may have medicinal properties, and the caterpillars which have evolved to feed on it may use those chemicals to give potential predators 'too much of a good thing.'

This elegantly inscribed species is the Brown Panopoda.

The Yellow-grey Underwing is a member of a group of moths which tend to have inconspicuously colored forewings that hide a more marked hindwing (or 'underwing'). A flash of the underwing may startle potential predators. The black underwing of this species is less showy than the redder wings of some of its cousins, but, at night, perhaps it is as effective. The caterpillars of both the Panapoda and the Underwing seem to favor the Juglandaceae, better known as... 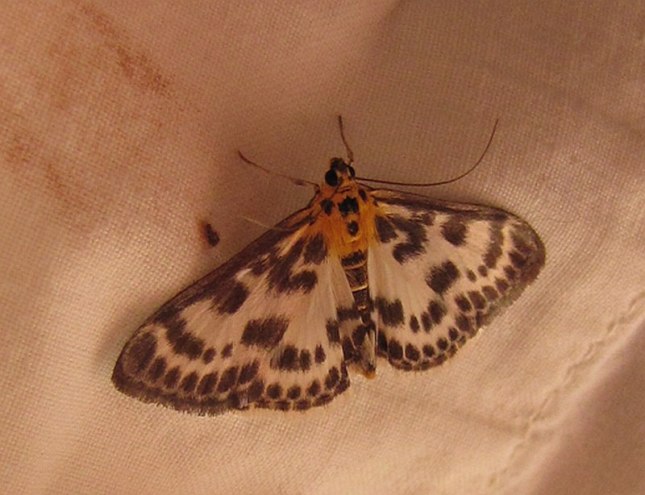 Finally, there are more particular feeders who seem to confine their feeding to one or a few sorts of plants. On the plus side, this allows very particular co-evolution that may facilitate use of a hard-to-digest food and the development of biochemical pathways allowing for the defensive use of particular food-plant compounds. A case in point might be this dapper Small Magpie, which feeds upon.... 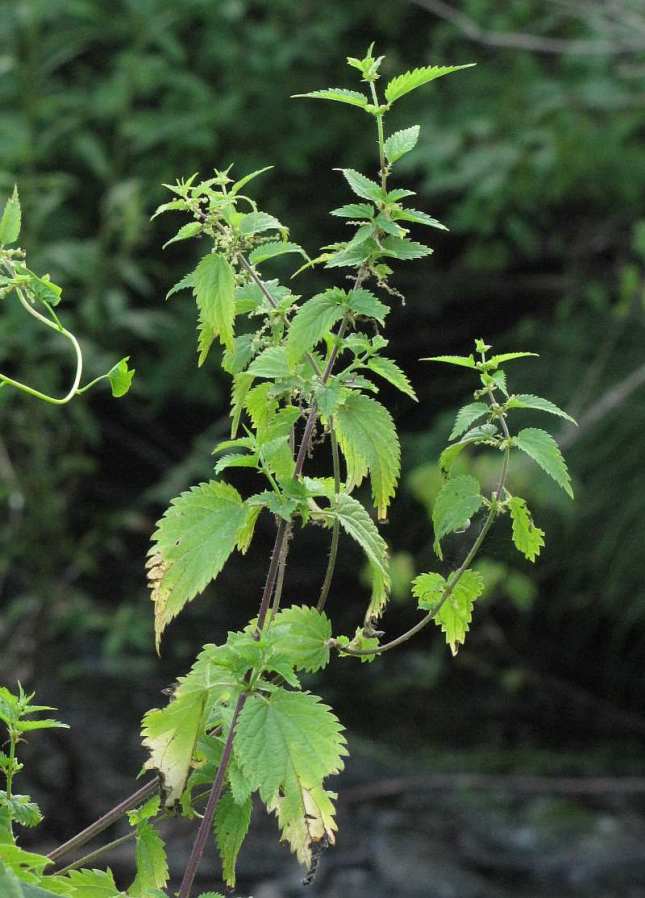 Nettles, a group of plants know to be both appetizing (when properly prepared) and somewhat 'uncourteous'. 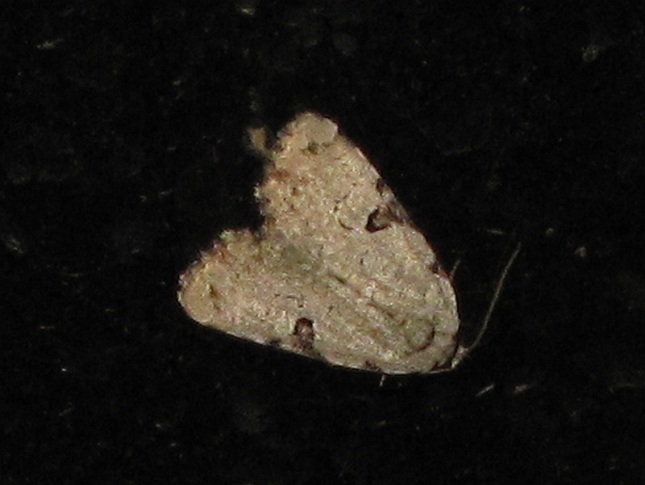 The Green leuconycta should have no problem finding food around our fields.

Goldenrod and Asters. (I have pictured Goldenrod flowers here, but the caterpillars are probably most interested in the inconspicuous leaves.)

Alder is a tannin-rich plant that seems to deter many herbivores and attract a few that have cracked its defenses. Doubleday's Baileya (shown here) and ... 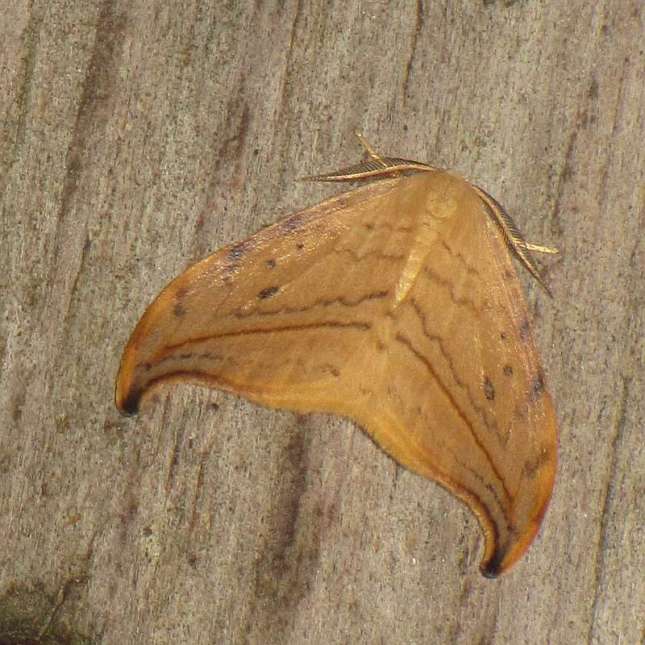 Arched Hooktip may haunt our wetter corridors where Alders are common. I've spoken little about camoflauge or other defensive coloration. This moth clearly seems to resemble something other than a moth, exactly what is less clear. 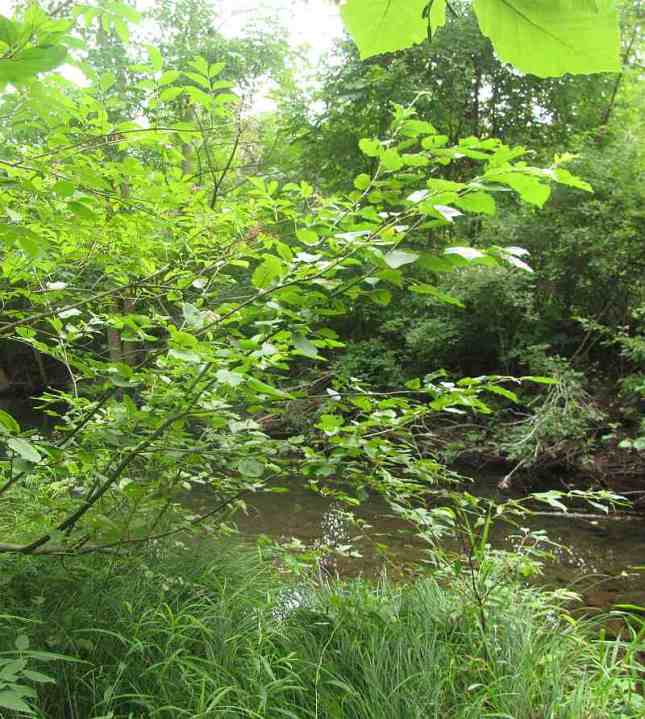 The creekside is spotted with Alders such as this one (whose young catkins are just dropping into the upper righthand corner of the photo).

Finally, some species may be particularly common on farm lands. This Chickweed Geometer (posed beside my finger for scale) eats that farmer's bane...

Chickweed (true confessions - this plant is now past flowering; this picture is from an earlier time and a bit farther away). While another weed is tackled by... 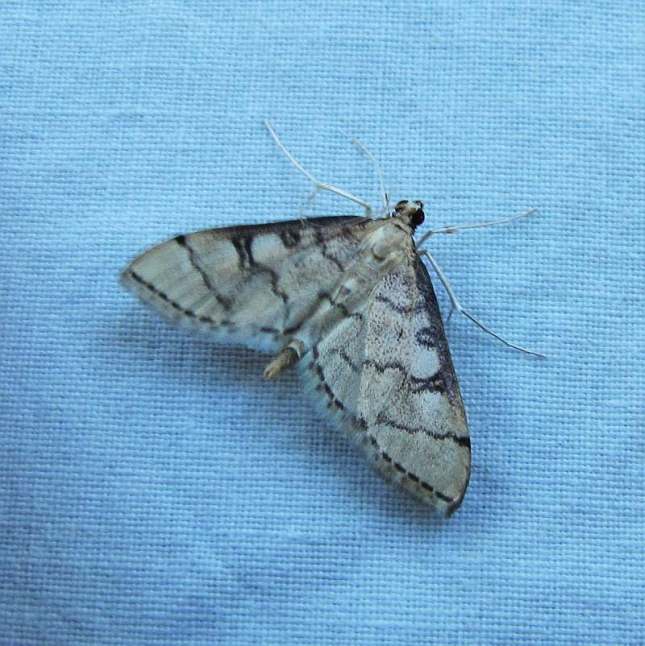 the Hollow Spotted Blepharomastix (who said entomological terms were boring?). It feeds on that widespread field weed... 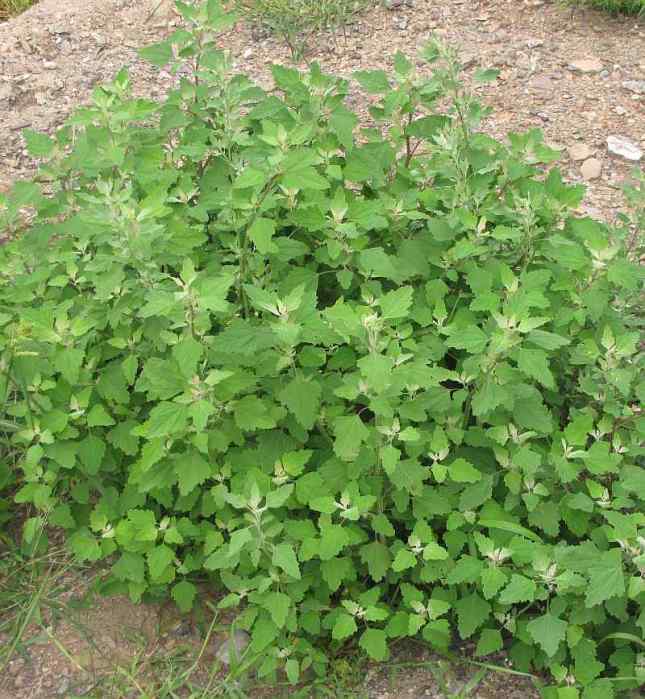 Lamb's Quarters or Chenopodium. There are several species of Chenopodium in the Northeast. Some are European imports. Other species however are native and were important food plants for Native Americans; quinoa, for example, is in this genus. 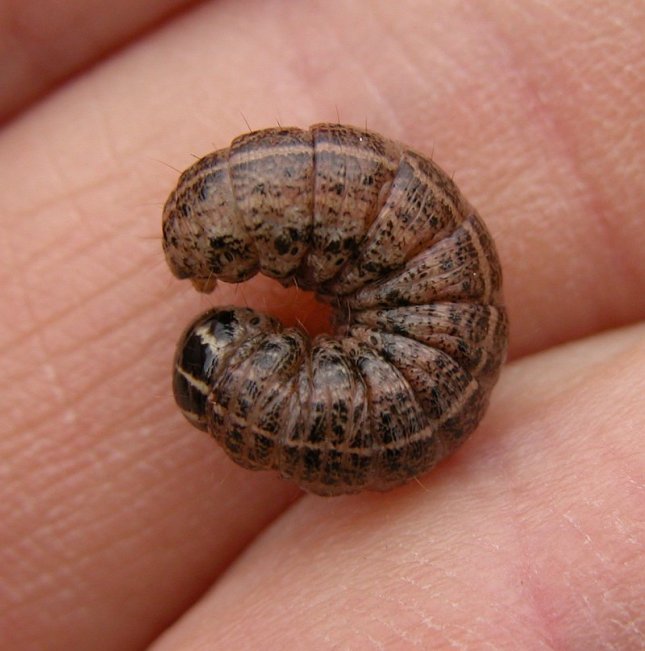 Most of our moths (and their caterpillars) pass their lives out of sight from many of us. A fate that may have allowed many to suffer the incidental wounds of our pest control efforts, habitat destruction and climate alteration. However, the Armyworm is probably better known than many farmers would like.

After eating its share of crops, the Armyworm metamorphoses into this moth which is known as nothing other than the Armyworm Moth; I suppose that is what happens when your caterpillar (or "worm") is so active, and (unlike the Wooly Bear) your moth is so non-descript. Armyworms are polyphageous, living on a variety of crops and non-crops including some woody plants. This species seems to have a generalist lifestyle that lets it make do in a range of landscapes. 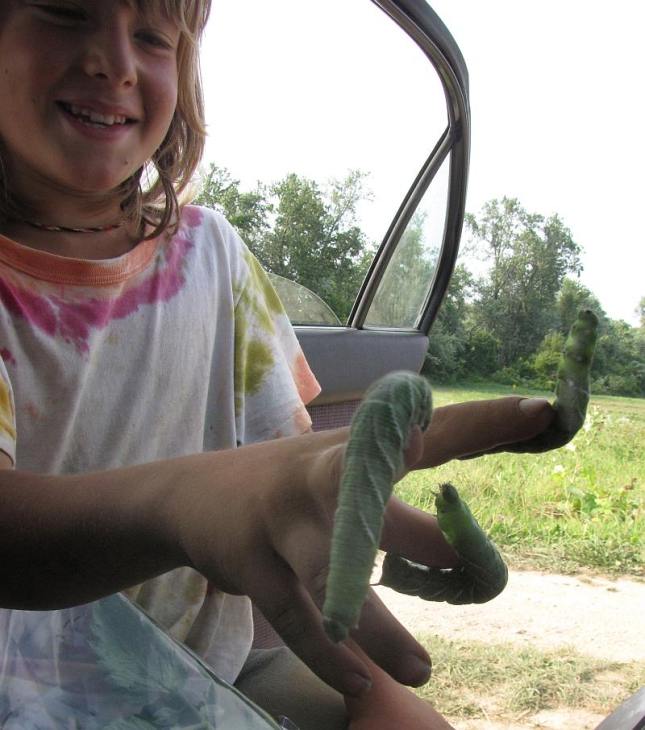 Trained hornworms... the next great pet fad. Farmers would be glad if their hornworms got poached for such use. Tomato and Tobacco Hornworms are the Tomato-family feeding caterpillars of two species of Sphinx moths, the Carolina Sphinx and the Five-spotted Hawkmoth. While we have found these caterpillars on the Farm's tomatoes, I've yet to see the adult moth - another reason to set up the light yet again tonight and see who happens by.

Posted by hvfarmscape on August 8, 2011 in Nature