This posting gives an update on the Native Plant Garden around the Creekhouse here at Hawthorne Valley. Our  goal with this garden is to showcase native plants with ornamental potential, provide a sanctuary for rare natives and their associated insects, and inspire more people to choose native plants as part of their own garden designs. Many native plants have become extremely rare in the wild, so please, never dig them up in their natural habitat, unless the habitat is about to be destroyed. If you do collect seeds from the wild, please collect them only where there are plenty and take only a small proportion of the seeds to ensure the sustainability of the wild population. Throughout this posting, I will point out where the plants in our garden came from. We are happy to swap seeds and plants with other native plant gardeners.

And should you get sick and tired of looking at late fall images of the garden, remind yourself how the garden looked at the height of the season with the images in the post of July 21, 2011.

When you drive by the Creekhouse these days, you see the Roadside Garden slowly going to sleep for the winter. However, there is still a lot going on…

We left most of the seed heads on the native asters and other plants, so there are still interesting patterns of color and texture to look at. As a side benefit, the seeds remain available as food for animals.

Aside from the rather dry-looking stalks and seed heads of grasses and asters, etc., there is still an amazing amount of green in the garden bed. 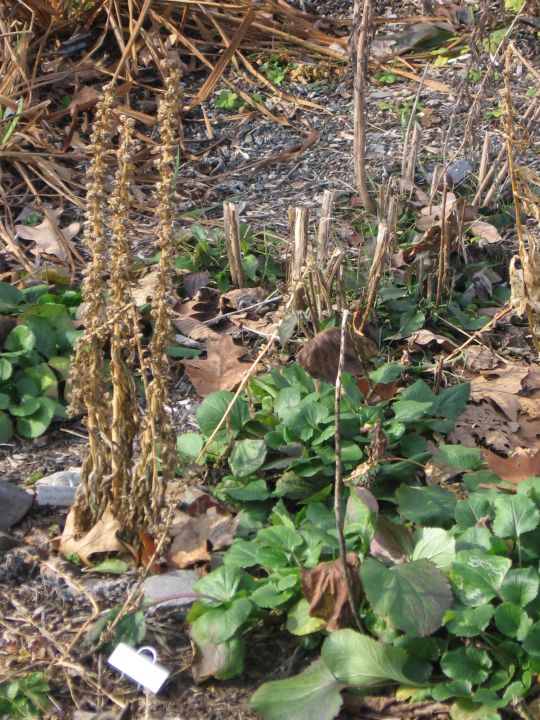 Golden Ragwort or Groundsel (Packera aurea, formerly Senecio aureus) provides a nice ground cover with its rosettes of ovate leaves. Golden Ragwort is locally abundant in swamps throughout the county, but these plants had been transplanted here from another ornamental garden last fall. The dry spikes on the left are Great Lobelia (Lobelia siphilitica), which was bought from Project Native and planted here last fall.

Another Great Lobelia (Lobelia siphilitica) forms its own rosette of green leaves. We know Great Lobelia in the wild only from a handfull of places in calcium-rich wet meadows in the eastern part of Columbia County. 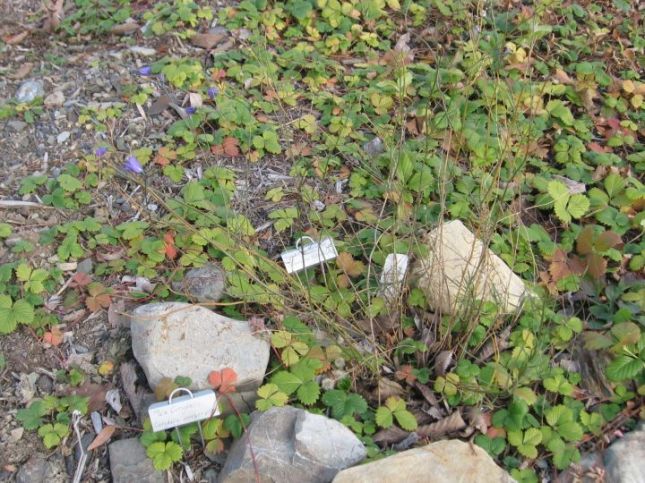 Amidst a rigorous ground cover of Wild Strawberry (Fagaria virginiana), transplanted here from another part of the Creekhouse garden, thrives the tender but prolific American Harebell (Campanula rotundifolia). Note its blue bell-shaped flowers which it presented continuously since June and is still not ready to give up… This plant was bought from Project Native and is very rare in the wild: we know of a single spot where it grows in Columbia County on top of the Taconic Ridge in Copake. 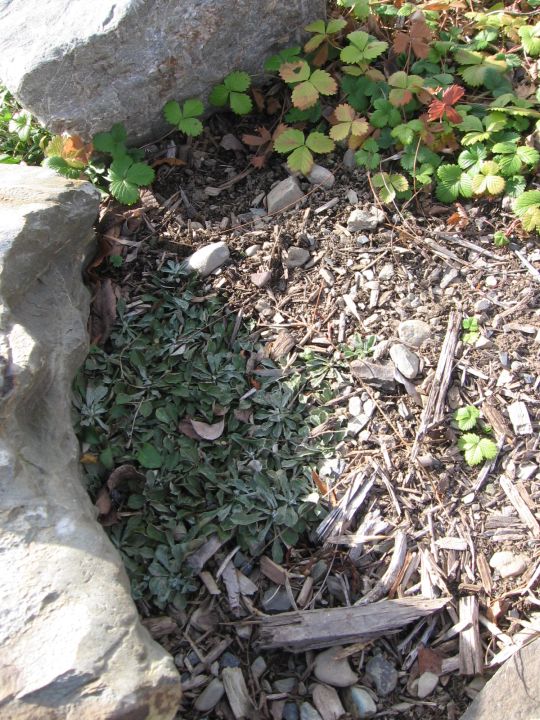 Hiding in the shade of the rock is another great ground cover: the velvety leaves of Pussytoes (Antennaria sp.). Pussytoes are not uncommon in dry meadows and on banks along roads. This one was transplanted from another garden. 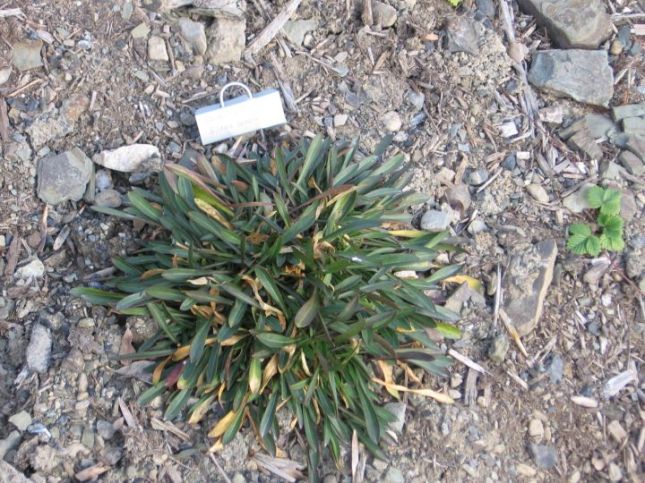 This is the rosette of a Carolina Pink (Silene carolinensis), which was bought from Project Native and planted here in the fall. This species is rare throughout NY State and in our County we have seen it at only two locations, both in Copake.

Wild Lupine (Lupinus perennis) has been known historically to occur in the south-western corner of the town of Hillsdale. We have not yet been able to re-locate this only known population from the County. Wild Lupine is one of the flagship species of the Albany Pinebush and host plant to the federally endangered Karner Blue Butterfly (Lycaeides melissa samuelis). Although the Karner Blue is highly unlikely to ever show up in our yard, I got this plant last summer on sale at Agway and it has rewarded us with beautiful blue flowers way into the fall.

All the native wetland shrubs we had bought from Project Native in the spring for this part of the garden have gotten well established and have been left alone by the deer (knock on wood!). 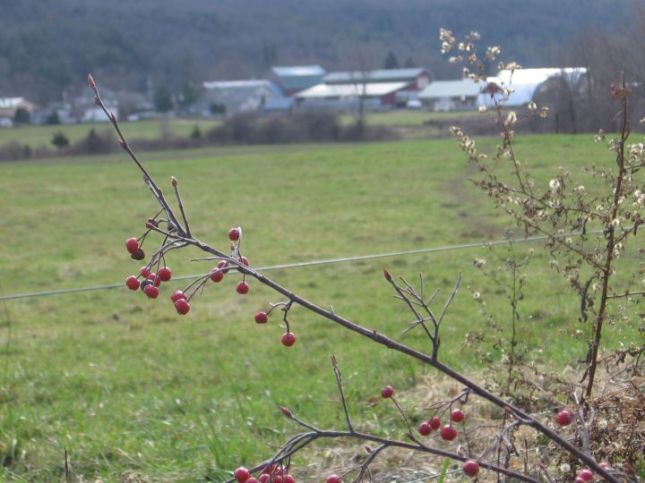 The sturdy sporophylls (= “spore-bearing leaves”) of Ostrich Fern (Matteuccia struthiopteris) have great ornamental value throughout the winter. We have Ostrich Fern from Project Native as well as some plants transplanted from a friend’s garden in the Rain Garden. 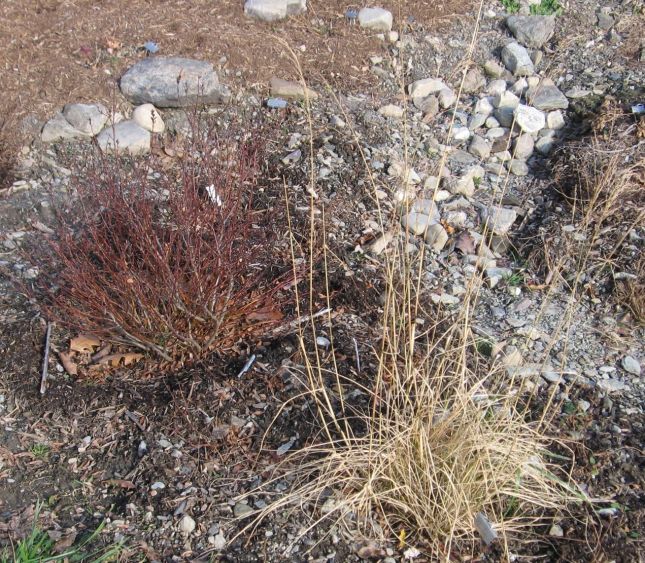 The pale leaves and stalks of Purpletop (Tridens flavus) contrast beautifully with the reddish hues of Bayberry (Myrica gale). While the latter came from Project Native, we proudly grew the Purpletop from seeds given to us by a friend last fall!

A rather indestructible native plant common to many roadsides in our area is Beardtongue (Penstemon digitalis). It was already established among the grasses along our roadside and we have transplanted it from that population to a variety of locations within the Native Plant Garden, where we now enjoy its sturdy late-season rosettes. 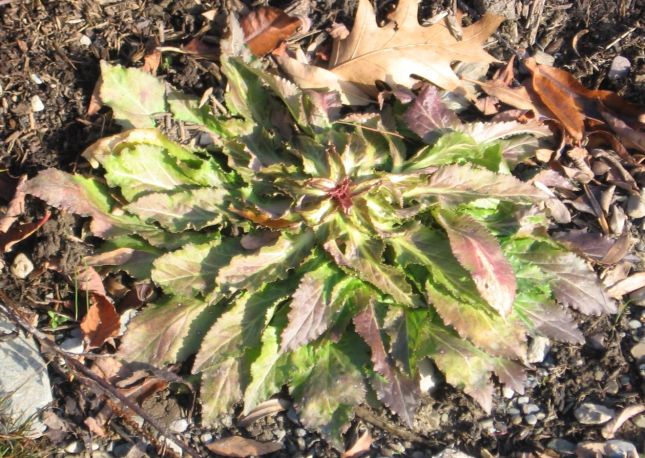 Another very sturdy rosette is formed by Cardinalflower (Lobelia cardinalis), which we grew from seeds collected last fall here on the farm. The seeds of Cardinalflower are tiny, almost dust-like and their newly-germinated seedlings looked rather fragile. But as soon as they were in the ground, they grew vigorously and now we are looking forward to next year’s flowers.

This Indian Grass (Sorghastrum nutans) was bought from Project Native this spring and has gone through an array of beautiful colors, including beautiful shades of green and pinkish-purple, until it finally settled on its late fall tan.

This Great Angelica (Angelica atropurpurea) came from Project Native and is still taking its time to go to sleep for the winter.

This little well-armed shrub is a native Swamp Rose (Rosa palustris) we grew from seeds collected in a swamp on the farm last year. This species is distinct from the invasive Multiflora Rose. It likes “wetter feet”, its flowers are pink (not white), and both its flowers and rose hips are bigger than those of Multiflora Rose.

Somewhat covered by the dried leaves of Sweetflag (Acorus americanus) is another rosette of still-green leaves: Yellow Avens (Geum allepicum), grown from seeds collected in a wet meadow on the farm last summer. 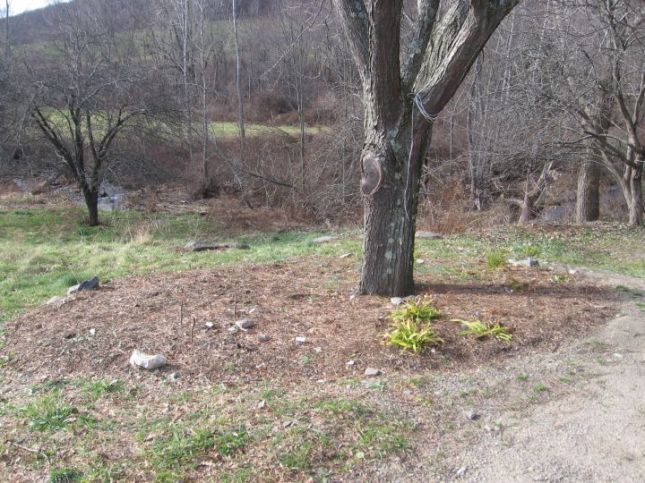 This newly cultivated area is our attempt to create a Woodland Garden surrounding the large and established Honey Locust tree, which is not native but tolerated for the shade it gives to the house.

After smothering the weeds with newspapers and covering the newspapers with bark mulch, we planted examples of native woodland plants, such as this Plantain-leaved Sedge (Carex plantaginifolia), which came from Project Native.

We also started a little fern glen with ferns from Project Native, including Christmas Fern (Polystichum acrostichoides), Marginal Woodfern (Dryopteris marginalis), Hairy Lipfern (Cheilanthes lanosa) seen on this picture, plus several other species not depicted. The grass-like green leaves sprouting all throughout are the invasive Garlic Grass (Allium vineale) which had been growing in this spot before and has found its way through the newspaper and mulch… 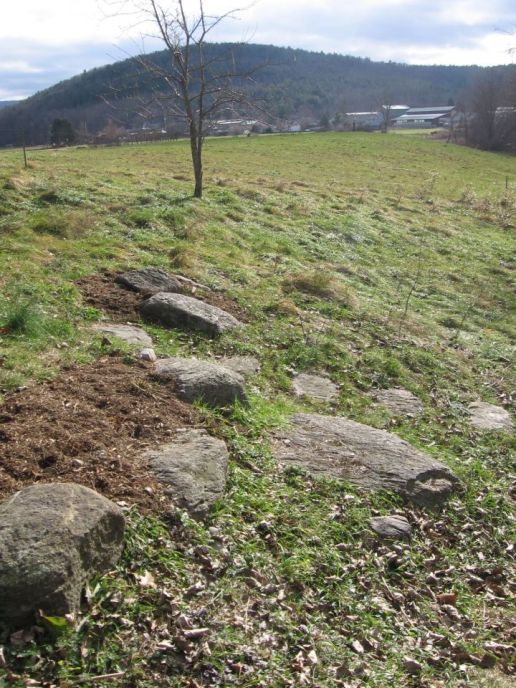 Another recently cultivated area is around these wonderful established stone steps below the Honey Locust tree.

We began by establishing the beds, claiming the space with mulch and then transplanting Columbines (Aquilegia canadensis) from another garden area on the farm.

We call this area the “Wild West Hill” and our efforts to date have been focused on watching which native plants want to grow there and trying to discourage the invasive Multiflora Rose (Rosa multiflora), Teasel (Dipsacus laciniatus), and Honeysuckle (Lonicera spp.), who would gladly take over this space in no time. We are also discouraging two of the native Goldenrods, Canada Goldenrod (Solidago canadensis) and Wrinkle-leaf Goldenrod (Solidago rugosa), who are all too happy on this disturbed hillside and hope to increase wildflower diversity by creating small “native wildflower islands”.

Along the wooded roadside and also around the foundation of the house, Herb Robert (Geranium robertianum) is a common sight. We know it from several calcium-rich forests and rock outcrops throughout the County and consider it a native species that we welcome to volunteer in the Creekhouse garden. 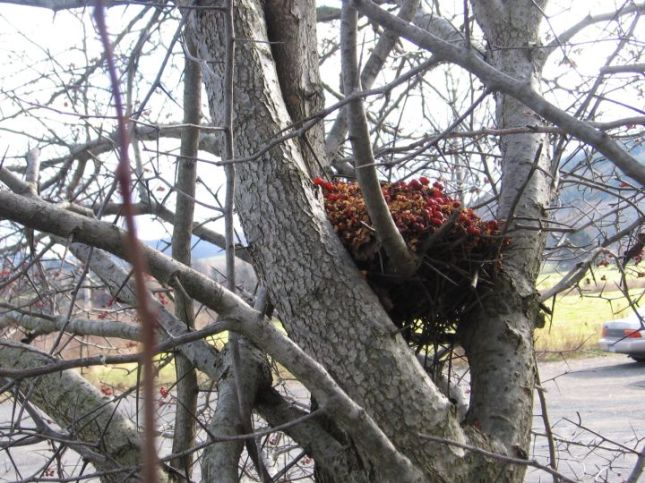 A Hawthorn tree by the parking area had a mockingbird nest this summer. Now, that the leaves are down, it turns out that the nest has found another purpose as the pantry and dining hall of some small rodent, who filled it with hawthorn berries.

I would like to thank Ruth Dufault and the many other people who have helped shape the Creekhouse Garden with their knowledge and ideas, their muscle power, their patient weeding, and/or with plants and seeds from their own gardens. This would not have been possible without you!

Posted by hvfarmscape on December 6, 2011 in Nature

← Local Literati and Landscape Change
Some Mosses on Phudd Hill →

One response to “NATIVE PLANT GARDEN IN LATE FALL”