Some Mosses on Phudd Hill

A mild winter day with no or little snow on the ground is a wonderful opportunity to observe some of the “lesser” members that make up our flora. Mosses are easily overlooked during other seasons when more spectacular displays, such as spring flowers or fall foliage, draw our attention. However, if you dare to look close, there is an amazing variety of shapes and colors represented in the mosses that cover rocks, tree boles, fallen logs, and even the ground.

Last week, we had a group of moss-enthusiasts visit Hawthorne Valley and together we explored  the base of Phudd Hill. Moss identification to species tends to require microscopes, technical literature, and LOTS OF TIME (at least for a beginner, like me…). So, in this blog, I am not even going to try to give you species names. All I am trying to do is to encourage you to have a closer look at the diversity of beautiful little moss plants that brave the winter and put in a few hours of photosynthesis whenever the moisture content and the temperature of their cells allow… 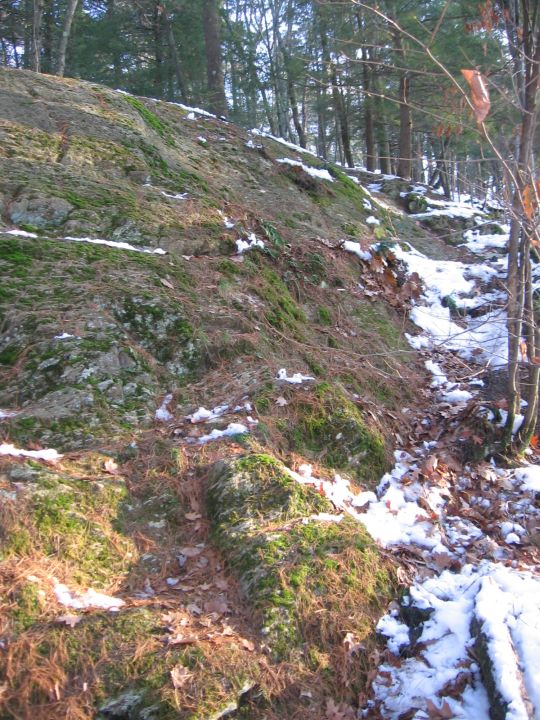 You might recognize this as the outcrop on the other side of the bridge, crossing from the school recess field over the Agawamuck. Although snow was still covering most of the ground, the steep rock face was almost snow-free, allowing the mosses to catch the sunlight.

Two very distinct mosses grow together on this section of the rock. The simple clusters of narrow, almost grass-like leaves belong to a species of Dicranum (a genus sometimes referred to as wind-blown mosses) and the characteristic feathery or fern-like fronds are from a species of Hypnum (also known as brocade moss, fern moss or log moss). Common names for mosses are not well-established and many of my moss books don’t even try to put common names, because they are too confusing and often applied to several different species…

This close-up of the Hypnum shows the characteristically curled leaves of Hypnum imponens. 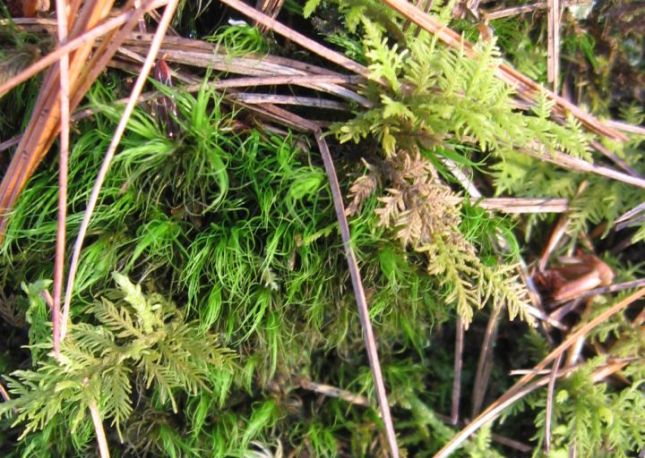 Here, another fern-like moss is growing together with the Dicranum. This is one of the Thuidium species (also known as fern mosses).

This very different, round-leaved moss which occurs on the same rock face is Plagiomnium cuspidatum. Below left, you see a close-up of its leaves and the rosette-like shoot tips that bear the spore capsules. Below that, are a few young sporophytes that are just emerging, their undeveloped spore capsules are still hidden under a cylindrical hood, the calyptra. 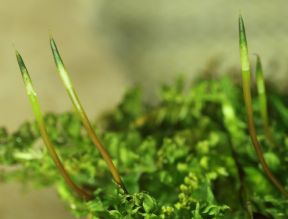 Turning right (south) at the base of the hill, one soon encounters the next rock outcrop. 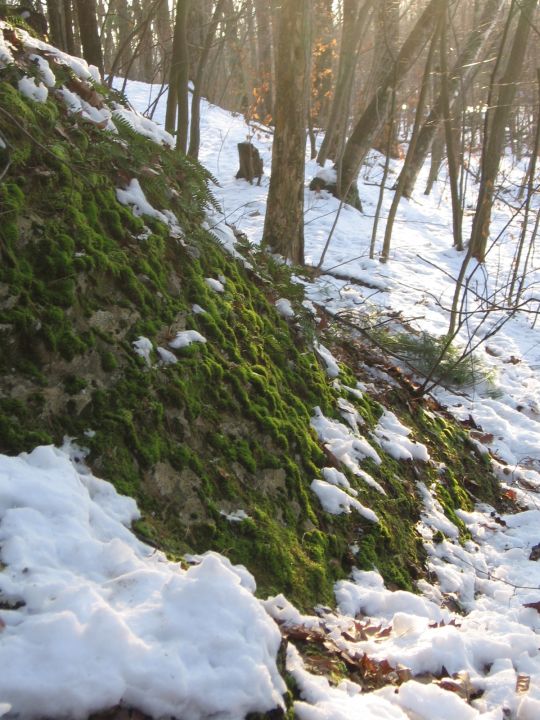 It has some mosses already seen on the first outcrop, but also a few new ones.

This picture captures a Leucobryum glaucum (white cushion moss) in the center. This characteristic moss becomes really common on top of Phudd Hill, on dry soil amongst the blueberries and chestnut oak. I was surprised to also see it on this rock face. Surrounding the cushion of Leucobryum glaucum are the drooping, waterfall-like shoots of another moss, possibly a species of Plagiothecium.

The close-up above illustrates the hanging branches, the close-ups below show young capsules developing at the shoot tips (left) and almost mature spore capsules, one with the calyptra still attached (right).

This recently established path crosses a colony of an interesting moss that we don’t see much on Phudd Hill.

It is one of the peat mosses (Sphagnum), much more commonly found in bogs (they form the peat in peat bogs!) and swamp forests. But this species seems to be happy with the moist soil on our steep hillside.

As a group, the peat mosses can be recognized by their star-shaped shoot tips, also known as capitula (=”little heads”). As you can see in the close-up below, the leaves are arranged in an overlapping pattern, so they have a phenomenal capacity to store water between them. Even dead peat moss maintains that water-storing capability, which makes it so popular as an additive to potting or garden soil. 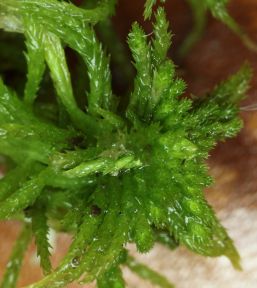 Another world all together are the mosses that live on the bark of trees. On your next walk in the woods, keep a look out for these quite common, small (~ the size of a quarter coin) green cushions that are usually only seen on the bark of life trees and often conveniently located at eye level.

We were able to distinguish two different types of these tree cushion mosses on the trees of Phudd Hill:

Orthotrichum sp. has relatively straight leaves and roundish capsules (at least when they are young). Older capsules that have opened and spread their spores have a characteristic urn shape (picture on the bottom right). 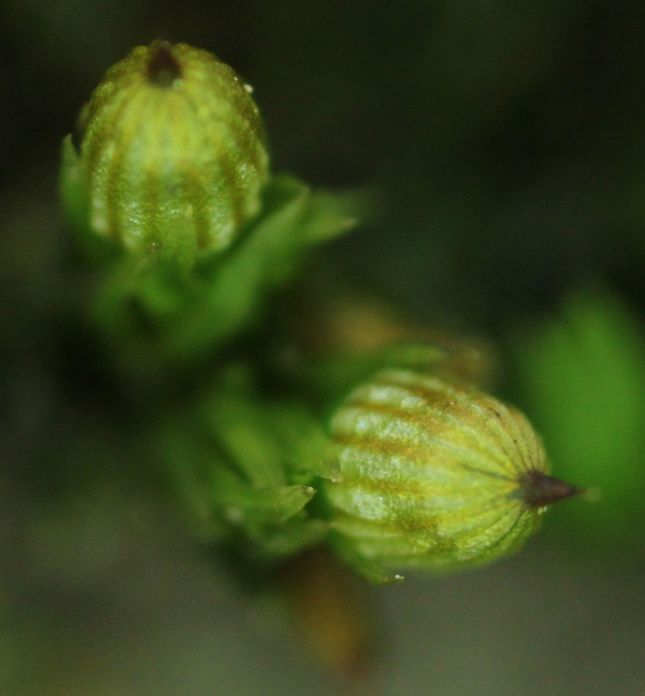 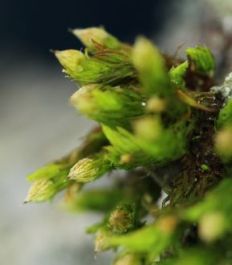 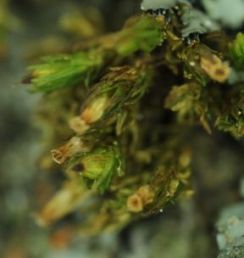 In contrast, the leaves of the other species of tree cushion moss, Ulota crispa, are crisped up, and arranged in somewhat disorderly-looking little bunches. Their young spore capsules are elongate and covered with bristles (directly below), while the old capsules are also more urn-shaped (below that). 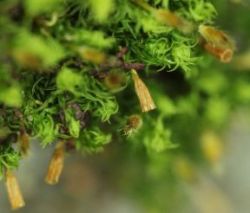 Another area where mosses are evident at this time of the year, is the shore of the Agawamuck. 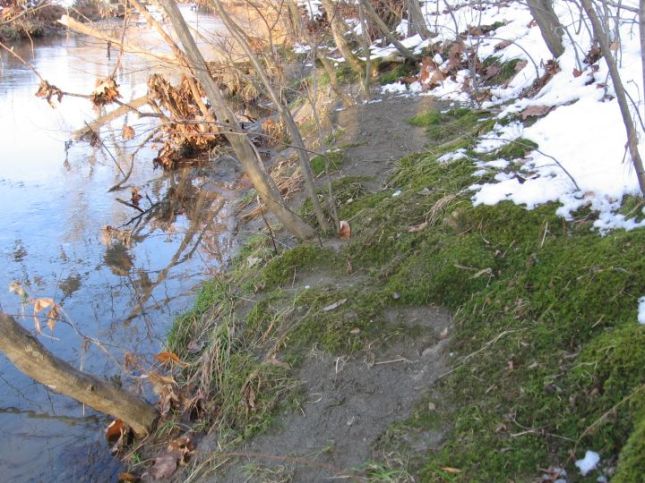 Upon closer inspection, this green colony is composed of many tiny star-shaped moss plants of the genus Atrichum. 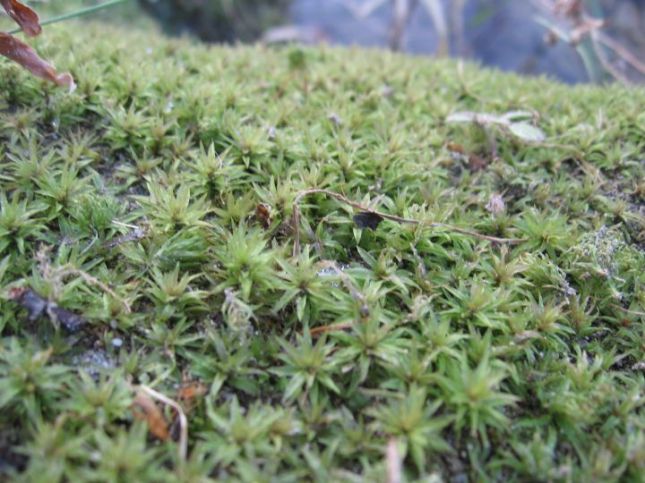 Below, you see a fully hydrated leaf, while the leaf below that is drying out.

“Next door” to the Atrichum down by the creek bank, we encounter a familiar sight: the same Thuidium or fern moss we had seen growing on the rock outcrop finds suitable conditions on the bare ground of the creek bank. 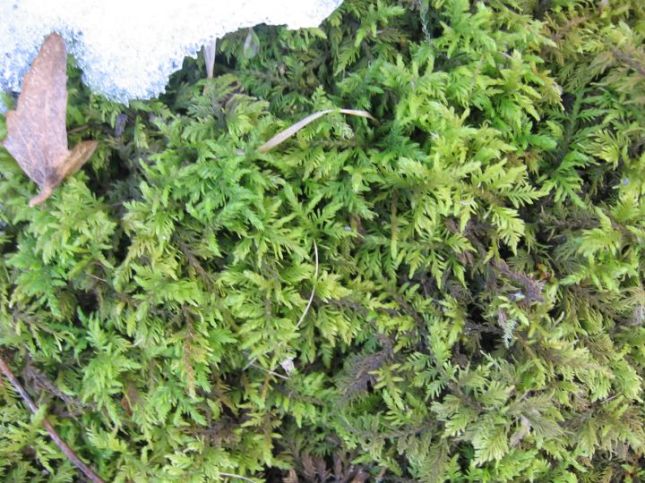 I would like to thank my moss teachers, Nancy Slack, Ralph Pope and Tom Phillips, for getting me started. I hope, if they find any mistakes in this blog, they’ll let me know and forgive me. I also thank Conrad for taking the close-up photos with his new macro-photography setup.

If you are interested in learning more about mosses and don’t want to wait for the occasional blog from me, check out this excellent moss blog by Sue Williams from the Berkshires. If you are looking for a chance to learn more about mosses in the field and with a microscope, you might want to check out the informal moss group that meets every second Monday afternoon in Troy (for info, please contact Tom Phillips, mossvet@nycap.rr.com). Finally, my favorite book about mosses, which is not at all technical and a pleasure to read, is “Gathering Moss: A Natural and Cultural History of Mosses” by Robin Wall Kimmerer.

Posted by hvfarmscape on December 20, 2011 in Nature