Spring is here at last! Even though there are no leaves on the trees yet, and the peak of flowering is yet to come, there are subtle signs of Spring stirring all around us.

The first tree to flower this year (as usual) was the Silver Maple with flower buds beginning to open in the first week of April. Each flower cluster is composed of either all male (pollen-producing, see image) or all female (seed-producing) flowers. The clusters (which are generally arranged opposite each other on the branches) give the twigs a gnarly appearance and change in color from red to yellowish (once the pollen gets released).

We are used to thinking of Pussy Willow as the first source of pollen for honey bees, but we observed many honey bees visiting these early Silver Maple flowers, as well… Red Maple comes into bloom shortly after Silver Maple, all the other maples will take a little longer. Sugar Maple only begins to flower once its leaves are unfolding.

The next tree to present its inconspicuous flowers to the world, was the American Elm.

The tiny Elm flowers are arranged in clusters that clearly alternate along the branches, giving them a somewhat zig-zag appearance.

Several native shrubs also flower before any of the spring wildflowers, most famously, the well-known Pussy Willow. Following are pictures of a few less conspicuous shrubs that are currently in bloom.

Above you see a branch of Alder with the male (pollen-producing) catkins at the tip of the branch and the reddish, female (seed-producing) cones a bit further back. The closely related Hazelnut (not pictured) has a very similar pattern and is also an early bloomer.

The rare Leatherwood (Dirca palustris) is presenting its diminutive flowers long before its leaves emerge and this tiny wasp is thankful! Below, you can see just how inconspicuous the yellow flowers of Leatherwood are. Unfortunately, Leatherwood is a preferred browse for deer in the winter and our tiny colony here at Hawthorne Valley has suffered tremendous deer damage during this cold and long winter. However, the few branches that escaped the deer are now full of flowers. 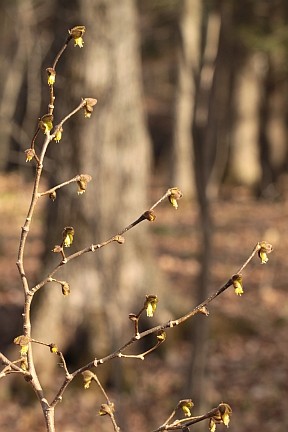 Also presented in small clusters are the wonderfully perfumed flowers of Spicebush, a native shrub of floodplains and other moist soils. It is related to Sassafras and the tropical tree that gives us bay leaves. Like its cousins, this shrub produces an array of aromatic substances that make it a favorite “scratch and sniff” example during our nature walks.

But not only the woody plants are beginning to flower. In the miniature world of mosses, tiny spore capsules (“sporophytes”), are beginning to appear on many species. Below is the short-stalked sporophyte of a Grimmia moss.

Apple moss (Bartramia pomiformis) has unusual, round sporophytes that look like – tiny apples!

Below is a more typical, still very young sporophyte of a Broom Moss (Dicranium sp.).

Another group of plants that are early bloomers with inconspicuous flowers are woodland sedges. The tiny flowers of these grass-like plants are arranged in spikes. In the case of the Carex platyphylla pictured below, the purple spikes at the top of the plant have male flowers, whose pollen yet needs to be released. The white threads emerging from the narrow spikes lower down on the stem, are the stigmas of the female flowers, out to catch pollen from a neighboring plant.

On to “real” flowers! Hepatica is often the very first to flower. It keeps its leaves through the winter, which seems to give it a headstart. Sometimes, we have seen flowers when the snow was not even all melted, yet. But some years, they take more time: below picture was taken April 22nd at the High Falls Conservation Area in Philmont.

Every year, the first flower to appear in the floodplain forest here at Hawthorne Valley Farm is Bloodroot. The image below shows a still somewhat tentative flower, barely emerging above its protective leaf mantle. 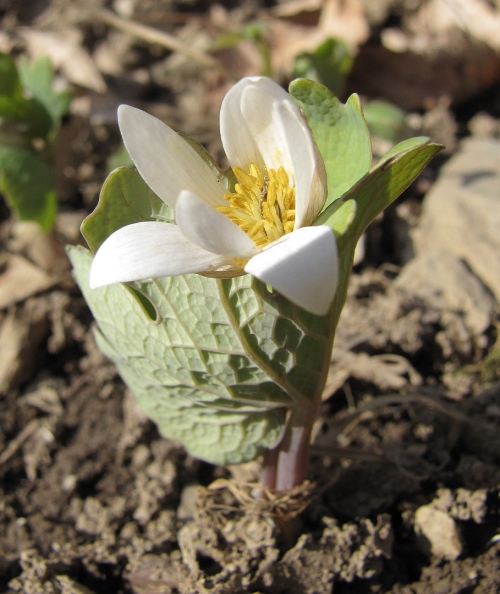 Also in the floodplain, as well as in other forests with rich and deep soil, this strange purple “fiddlehead” emerges early in Spring. 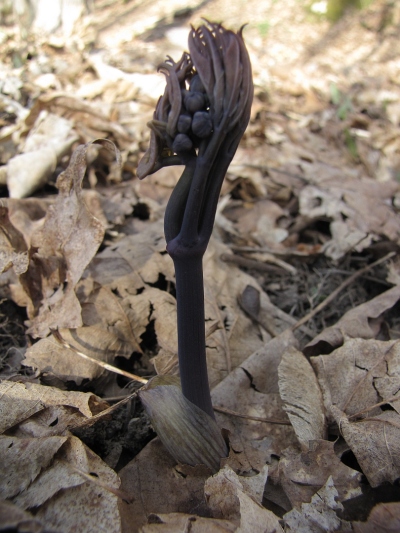 It is the young shoot of Blue Cohosh, which will be flowering for a few weeks as its finely divided leaves emerge and the plant grows to its full height. However, some flowers can’t wait and are opening up before the leaves have unfolded.

Most of the spring flowers are still at the green shoot stage, such as the False Hellebore pictured below.

The very poisonous False (or American) Hellebore is easily recognized by its prominently ribbed leaves, which distinguish it from the simultaneously emerging very smooth leaves of Wild Leek or Ramp.

The recent culinary craze for wild-harvested Ramp has led to overharvesting of many local patches of this native plant. We encourage wild crafters to please only take Ramps in areas where they are certain that the harvest is sustainable (i.e., not in public areas, because nobody knows how many other people are “just taking a few plants”).

The distinctly mottled leaves of Trout Lily are springing up in many places and often form entire Trout Lily lawns. Most leaves of such a colony are actually connected underground and belong to the same clone. When the flowers start emerging, you will see that only two-leaved plants are strong enough to produce flowers. The majority of leaves will remain without flowers.

Even with the flower still firmly enclosed in its bud, Trilliums are easily recognized by their unique arrangement of three leaves in a whorl. 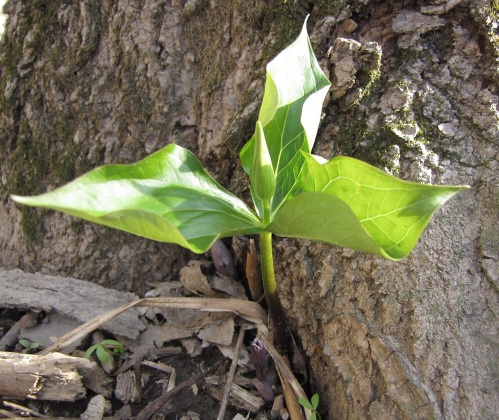 Once in a while, we come upon a rare patch of Wild Ginger, usually in floodplains or near calcium-rich rock outcrops.

Their newly emerging leaves are thick and hairy and stay very close to the ground.

And below the fresh leaves, often half buried in the ground, are the flowers. These hidden and inconspicuous flowers are neither wind nor bee pollinated, but instead wait for flies to come and visit.

At the same time as these early plants are beginning to stir and reproduce, our early amphibians are on the move. This year, the first major movement of Spotted Salamanders (pictured below) as well as Wood Frogs, happened at Hawthorne Valley in the night of April 7. That same night, we heard the first Spring Peepers in the valley.

Spotted Salamanders belong to the mole salamanders, who live most of their life under ground and only emerge in spring to reproduce in vernal pools and other shallow waterbodies. The warm and rainy night of April 22 saw another major movement of these salamanders, most likely retreating from their breeding waters back to their upland habitat.

Red-spotted Newts are salamanders with a very different life history. They spend their adult life in permanent waterbodies, occasionally preying on the eggs of Wood Frogs (pictured below) and Spotted Salamander. Curiously, the bright orange salamanders so commonly found on rainy days in mid summer, and known as Red Efts, are but the teenage stage of the Red-spotted Newt. They spend a few years exploring the world away from water (and thereby colonizing new areas), before they choose a pond to settle in for the rest of their lives. When they return to the aquatic world, their skin looses most of its bright color and their tails become sideways flattened to aid in swimming. However, as you can (barely) see in the picture below, they keep their two rows of tiny bright orange spots, which are often also easily discernible on the Red Efts.

On one of our jaunts to check out the vernal pools up on Phudd Hill, we came across the smallest Garter Snake we have ever seen. Its total length was no more than 5 inches. That was one cute snake!

Only slightly bigger was the DeKay’s Brown Snake (pictured below) we found at the Keep Conservation Preserve in Germantown. These snakes are not as often seen as the more familiar Garter Snake, although, supposedly, they are not uncommon, either. They lack any trace of the yellow stripes along the sides that are typical for the Garter Snakes. 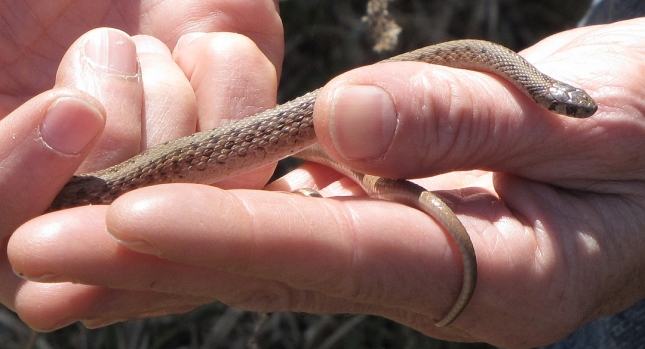 The insect world, too, has interesting discoveries waiting in early spring. At the Keep Conservation Preserve, we came across a small Sassafras tree that had several of these curiously shaped cocoons dangling from its branches. Some research (and the correcting hand of Bonnie, a RI moth’r) determined that these are the cocoons of Promethea moths, one of the four largest moth species in the Northeast, which reaches a wing span of 5 1/2 inches. Please look here if you are curious to see who is scheduled to emerge from its overwintering pupa inside the cocoon in May. 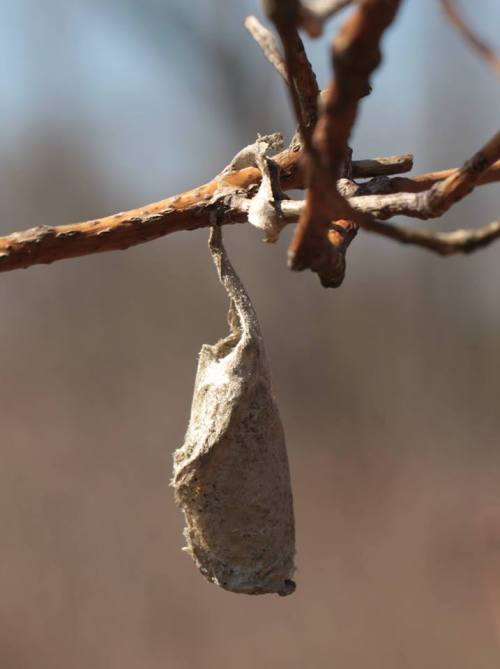 Not as big as a Promethea, but just as intricate in its color pattern and delicate arrangement of scales and hairs, is the Joker moth (pictured below; it is also known as the “Jacose Sallow”) which was attracted to a moth light Conrad put onto the porch of the Creekhouse in mid April.

But not only the moths in their “fur coats” are out and about in early spring. Several butterflies could be seen fluttering around on warm days in early April. Mourning Cloak and Comma are the two that every year are spotted first. Both overwinter as adult butterflies and can sometimes even be seen flying on a warm winter day. They lick sweet tree sap dripping from broken twigs instead of looking for nectar, which is at that time in preciously short supply.

The aptly-named Spring Azure (pictured below), is the first butterfly of the year to newly emerge from its overwintering pupa. 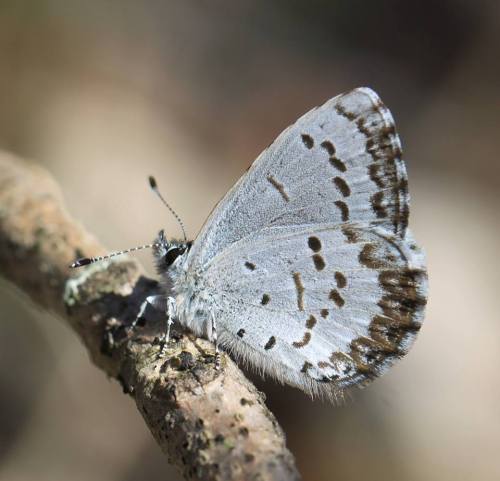 A Red Flat Bark Beetle (Cucujus clavipes) – known for its flat, under-bark-facilitating shape and its overwintering prowess. Apparently larvae (reportedly the main overwintering stage) can resist amazingly cold temperatures. Not surprisingly, their range extends quite far north. Less know is how they spend their time and their main diet items.

A Green Stink Bug, apparently some individuals do hibernate through the winter. These creatures suck plant juices and so are considered pests by some.

Following is a Jumping Spider in the process of subduing its large Stonefly prey.

And finally, a Citronella Ant (Lasius sp.), which gets its name from its characteristic smell. These ants are livestock farmers who cultivate and protect root aphids from which they harvest honeydew. This ant is transporting one of the root aphids. 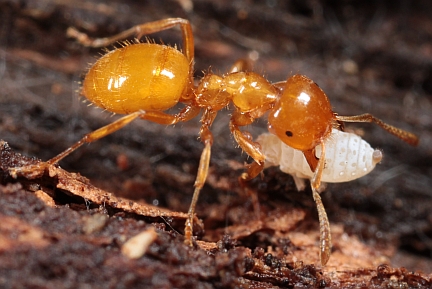 One response to “First Signs of Spring”